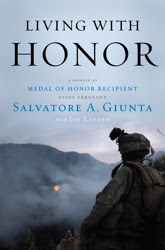 “Of course, I had no idea of the cost that came with war.  You have to be there, and you have to see it for yourself, to fully understand it.” SSG Salvatore Giunta
When my advance copy of Living with Honor, A Memoir arrived it took me a few hours before I finally sat down to read it.  Since I know Sal and many of the men he served with I was anxious as to what stories he had shared in the book.  I wasn’t sure I wanted to revisit most, if not all, of those stories.  By the time I had finished the book it was clear that, while he certainly addresses the experiences of joining the Army and of being deployed in war, this is not a typical blood and guts war story.
To be honest my initial thought when I asked for the advance copy was that I would write a book review to publish along with an interview with Sal.  I’m not sure what I was thinking.  I’m too close to Sal and many of the men he wrote about to be completely subjective about this book.  However, I will say that, without question, Sal should be extremely proud of this book.  It is respectful, insightful, thought provoking, thorough, emotional and candid.
Living With Honor, A Memoir by Medal of Honor Recipient SSG Salvatore A. Giunta is divided into four parts; Before Afghanistan, First Deployment, Korengal and Rock Avalanche.
SSG Giunta writes about the fire fights and ambushes, the loss of friends, the relationships with and separation from loved ones, the dynamics of being a U S Soldier, the mentoring of his leadership, training, the brotherhood, losing friends and fellow Soldiers in battle and, of course, the event that lead up to his being nominated for and receiving the Medal of Honor.
As he has so often done in interviews, he writes about how he’s not any different from anyone who has served our nation throughout time and emphasizes that the Medal of Honor is not his but that it belongs to all of those who served.  I’ll never forget a quote from Sal during an interview after it was announced that he would be awarded the Medal of Honor.  He said, “They are just as much of me as I am.”  Sal was talking about all of the men who were on the patrol with him that day and how, even though the Army was awarding the actual Medal to him, it belonged to (and always will) anyone with whom he has served.
INTERVIEW

Sal is an affable, self effacing and humble young man.  I had asked him for an interview after I read the book and was grateful that he agreed to do so.  On the day that I called Sal he was home but out running errands so he asked me to hold on while he walked out to his car for privacy.  As we began this interview I was immediately struck by how nervous he was.  When I asked him why he told me that it’s not easy to talk about the book to someone he knows.

Me:        How did you decide on the title “Living With Honor, A Memoir”?  Is there any significance to the title?

Sal:        Originally I wanted the title to be “In the Valley” to represent what American Soldiers do and did there.  At only 27 years of age I didn’t think I had a lot of years behind me to be writing a memoir but the people I was working with thought the title we settled on was a better fit.

Sal:        It took about seven months from the time I started working with Joe (Joe Layden).  Part of that was the writing but there was also the fact checking and editing part, too.
Me:        How did you get connected with Mr. Layden?

Sal:        When I started thinking about writing a book I spoke with one of the older Medal of Honor Recipients.  He put me in touch with a literary agency.  They selected Joe.

Sal:        I hope the take away from reading this book is how plain and average I am just as are most Soldiers who fight for our nation.  I also hope the readers learn that service isn’t just for those in uniform; that anyone can get involved at the community level and make a difference.  While those I served with and I may be professional Soldiers we really aren’t any different from any American citizen.  We just all “gave back” in our way.

Sal:        I honestly think it was just trying to pull up things that had happened in the past.  I had to force a lot of things from the past back to now.  I didn’t want to do that and it wasn’t easy.  It took a real toll to think of a lot of things that have happened over the past seven years; to think about the guys who aren’t here anymore because of their service.  Talking about Gabel was really tough because I remembered the deep sense of loss I felt when I heard about his death.  I hated he wasn’t here.  When Gabel spoke at Rougle’s Memorial in Afghanistan I hadn’t seen him in a while.  His words seemed so black and white then.  A month later he was gone.  I didn’t feel the emotions about all of that then like I do now that I’ve had to revisit that for the book.

Sal:        No.  It actually opened up a lot of old wounds.  I hope they heal better this time than they did before.  To be honest I don’t know if there has been any healing yet.  It really all depends on the acceptance of the book; first by my battle buddies then by the general public.  It’s really important to me that people know just how awesome the 173rd is because it IS the most awesome Brigade in the Army bar none.

Sal:        (laughing) Well, maybe that I was promoted eight times before I made SSG.

Me:        Why did you choose to write so much about your life’s journey than about the specifics of your war experience?

Sal:        Part of the story I wanted to convey is that we can always do better in life.  I’m a product of my environment and I want to give credit to my family.  There is more to war than being in country and firing a gun.  If you only focus on combat you lose who you are.

Me:        You were recently awarded the LT Michael Murphy Valor Award.  Tell me about that.

Sal:        When I was first contacted I said no because I don’t think one should receive an award for having an award.  Then I talked to SFC Leroy Petry who received the award last year and I changed my mind.  By receiving that award, just as with the Medal of Honor, it allows me to have a voice for all of those who have served.  That’s important to me.  I didn’t get to meet LT Murphy’s parents.  They weren’t able to be there.  I hope to get to meet them one day soon.  I was very honored that I was selected to receive the award.

Me:        Will there be a book tour? (This question was asked before the dates were set.  See below for a partial list of dates)

Sal:        Yes but no dates have been set or cities selected yet.  I will be in New York City in early December promoting the book via which ever outlets will have me.

Sal:        There are no plans to sell or provide autographed copies so I guess people will have to come to a book signing for that.  There will be an audio book, too.  I recorded the prologue and the epilogue.  Keith Nobbs will record the actual book itself.

BOOK TOUR INFORMATION:  (This is a partial list.  Final list will be published once received.  Dates and Times subject to change)

Posted by ParachuteCutie at 11:21 AM

Damn! Nothing in GA? Maybe one day!

Just wondered if you have heard if he has updated his book signing schedule?