The ROCK is in Afghanistan - AGAIN 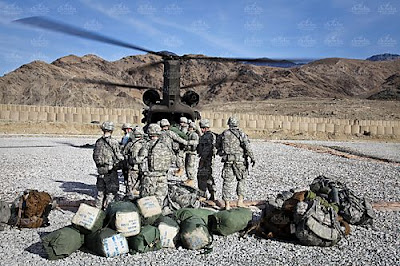 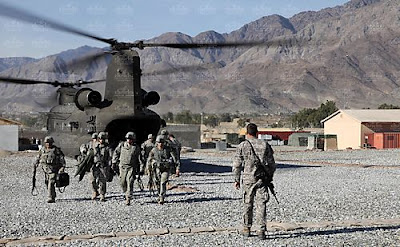 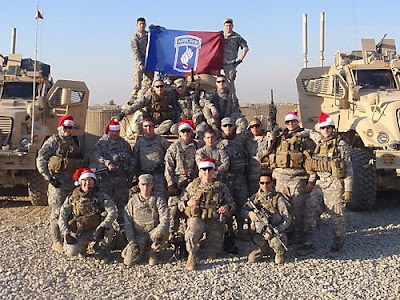 Be safe men and don't ever forget how much we appreciate and respect you. We're here for you 24/7.

Posted by ParachuteCutie at 10:31 AM 0 comments

LOGAR PROVINCE, Afghanistan – Soldiers from the 173rd Airborne Brigade Combat Team, the 3rd BCT, 10th Mountain Division and their distinguished guests, stand for the American and Afghan national anthem at a transfer of authority ceremony at Forward Operating Base Shank, Dec. 20. The Spartans of 3rd BCT transferred authority of Logar and Wardak provinces to the Sky Soldiers of the 173rd ABCT for their third deployment to Afghanistan in support of Operation Enduring Freedom. (Photo by Army Pfc. Michael Sword, 173rd Airborne Brigade Combat Team)

LOGAR PROVINCE, Afghanistan - In a ceremony held at Forward Operating Base Shank, the Spartans of 3rd Brigade Combat Team, 10th Mountain Division, handed over control of their area of operations to the Sky Soldiers of the 173rd Airborne Brigade Combat Team, based out of Vicenza, Italy, Dec. 20.

Scaparrotti highlighted some of the achievements of the 3rd BCT.

“Working side-by-side with Afghan partners, you protected the southern gates of Kabul, improved the infrastructure at the provincial and district levels and extended the reach of good governors throughout both provinces,” he said.

“While much has been done through Task Force Spartan, there’s still plenty of work to be done,” he added.

However, Scaparrotti showed confidence that the 173rd will continue where Task Force Spartan left off.

“I look forward to the outstanding support the Sky Soldiers bring to the fight,” he added, “It’s an honor to serve with you again.”

Col. David B. Haight, commander, 3rd BCT, followed Scaparrotti noting the accomplishments of his Soldiers during their time in Afghanistan.

“With our Afghan army and police brothers, we planted our guidons in the heart of the enemy territory. We dominated our battle space and established permanent presence in 10 districts, across two provinces, that have become dangerous sanctuaries for the enemy,” Haight said.

Haight also mentioned the progress made in the two provinces during the Spartans’ year-long deployment.

“We allocated almost 50 million dollars in development of roads, transportation, governance, water sanitation, health and education,” he said. “All in an attempt to connect the people with their government and help them understand the work and progress made on their behalf.”

Haight then turned his attention to the commander and soldiers of the 173rd ABCT.

“Col. Johnson and Command Sgt. Maj. Rolling, I could not be more confident in the success you will realize during the coming year,” Haight said. “Your unit is disciplined, well trained, well led, and enthusiastic about the mission and that may be the most important thing.”

“I am confident that you will prevail and greatly improve upon what has been established here in this battlefield,” Haight added.

Recognizing the hard work and progress made by the 3rd BCT, Col. James Johnson, commander, 173rd ABCT made a final promise to the Spartans.

“You have set the high standard for us to follow, and we will do our best,” Johnson said. “We will ensure that the sacrifice of Task Force Spartan was not made in vain.”
Posted by ParachuteCutie at 10:44 AM 0 comments

I received a call early Tuesday morning from a Platoon Sergeant that I know well. One of his Soldiers was in a very difficult situation. I won't go into all of the details but his 16 year old son from a prior marriage had been the victim of a drunk driver. The son was in a coma for 3 weeks and had recently awakened from the coma. He has paralysis in all but his left arm. The father had been granted emergency leave to be with his son but didn't have the financial means to travel from his duty station with his wife and step daughter to be with his son.


As the Soldier and I talked throughout the day while I was contacting people and organizations to help him he kept telling me two things over and over. 1) "Ma'am I can't ask you to do this for me." To that I assured and reminded him that HE didn't ask - his Platoon Sergeant did and I was grateful to his PL for doing so. 2) "I don't know how to thank you." His sincere gratitude was overwhelming to me. I knew from talking to this Soldier that he was a good man, a good father and a good Soldier. Zero doubts.

I am very happy to report that the Soldier arrived at his son's hospital bedside last night thanks to the generosity, love and compassion of Donna Cranston of Defenders of Freedom and Patti Patton Bader of Soldiers' Angels. I also want to thank two special friends of mine, Matt Burden of Blackfive and Jo Lombardi, for their assistance in helping get this information expidited so quickly.

The Soldier and his family may not be having the merriest of Christmases this year but thanks to the people and organizations mentioned above the father and son are together. My heart is happy for that and more than grateful to Donna and Patti. The emotion and relief in the Soldier's voice reminded me of the true spirit of giving, family and Christmas.
Posted by ParachuteCutie at 1:12 PM 0 comments