Back in 2008 when the 173rd redeployed from Operation Enduring Freedom VIII, a group of us came together to raise funds for a "Welcome Home" party for 2-503d.  The group included folks who had family members and/or friends in 2nd Batt.  The group included Gold Star families.

Who would have ever imagined when I snapped this image (among hundred of images I snapped that night) of Sal, Ryan, Kyle and COL (then LTC) Ostlund, the 2-503d Battalion Commander for OEF VIII, that all three of those men would wear the Medal of Honor one day?

I love these men and their families and am beyond honored that they are my friends.

Note:  This photo cannot be used without permission from Leta Carruth


Posted by ParachuteCutie at 9:00 PM 3 comments 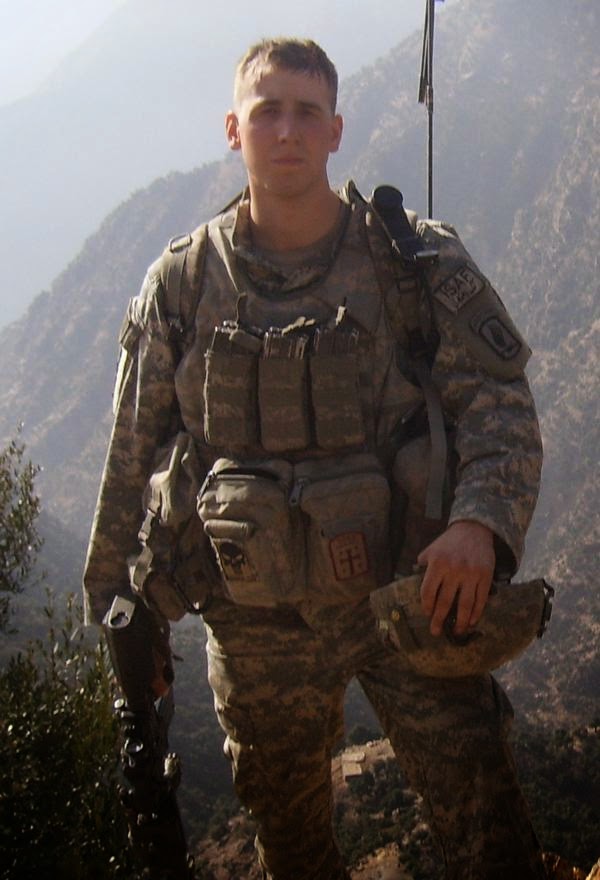 SSG (r) Ryan M Pitts will receive the Medal of Honor in a White House ceremony on 21 July 2014 for his valorous actions at the Battle of Wanat, Afghanistan on 13 July 2008.  Ryan, a Forward Observer, was serving with the 173rd, 2-503d, Chosen Company during OEF VIII at the time the Battle of Wanat occurred.


THE WHITE HOUSE
Office of the Press Secretary
FOR IMMEDIATE RELEASE
June 23, 2014

President Obama to Award the Medal of Honor

Staff Sergeant Pitts will be the ninth living recipient to be awarded the Medal of Honor for actions in Iraq or Afghanistan.  He and his family will join the President at the White House to commemorate his example of selfless service.

Staff Sergeant Pitts separated from the service on October 27, 2009 from Walter Reed Army Medical Center.  He currently lives in Nashua, New Hampshire, where he works in business development for the computer software industry.

Staff Sergeant Pitts enlisted in the Army in August 2003 as a Fire Support Specialist (13F), primarily responsible for the intelligence activities of the Army’s field artillery team.   After completion of training at Fort Sill, Oklahoma, and follow-on parachutist training at the U.S. Army Airborne School, Fort Benning, Georgia, he was assigned to Camp Ederle, Vicenza, Italy, as a radio operator with the 4th Battalion, 319th Field Artillery Regiment and 173rd Airborne Brigade where he deployed to Afghanistan.  His final assignment was with the 2nd Battalion (Airborne), 503rd Infantry Regiment "The Rock", 173rd Airborne Brigade as a Forward Observer which included a second combat tour to Afghanistan.


At the time of the July 13, 2008 combat engagement, then-Sergeant Pitts was a Forward Observer in 2nd Platoon, Chosen Company, 2nd Battalion (Airborne), 503rd Infantry Regiment 173rd Airborne Brigade as part of Task Force Rock. His heroic actions were performed at Vehicle Patrol Base Kahler, in the vicinity of Wanat Village in Kunar Province, Afghanistan.

Please go to this link to read more about these American Heroes.

The internet will have written and video stories and interviews regarding Ryan's actions that day.  I'd like to share with you a couple of other stories about Ryan that show his character and compassion.

I first met Ryan when he and several of his battle buddies were recovering at Walter Reed Army Medical Center in Washington, DC.  I was privileged to spend time with them on several visits over the months that they were there.

In May 2009 Ryan flew from Washington, DC to Memphis, TN for two "missions".

One "mission" was to visit Evan Pertile who was a patient at St. Jude Children's Research Hospital.  Evan wasn't having a particularly good day when we went to visit.  His mother has told us not to expect to stay long or for Evan to be very full of life.  Apparently Ryan was good medicine for Evan, though.  The entire time we were there Evan was laughing and being a rambunctious little guy.  It was beyond heart warming to watch Ryan and Evan interact.

You can read the entire story and see all of the photos of that "mission" at this link.  I am happy to say that Evan is still cancer free and doing well. 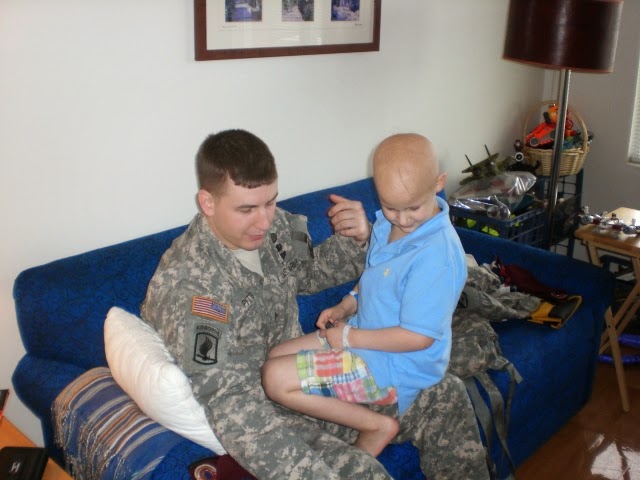 Evan warmed up to Ryan right away.  Evan's mother was a bit stunned when Evan crawled right into Ryan's lap not long after we arrived. 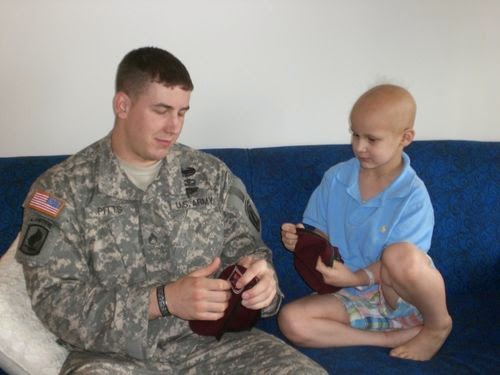 Ryan showing Evan how to get the beret "just right" 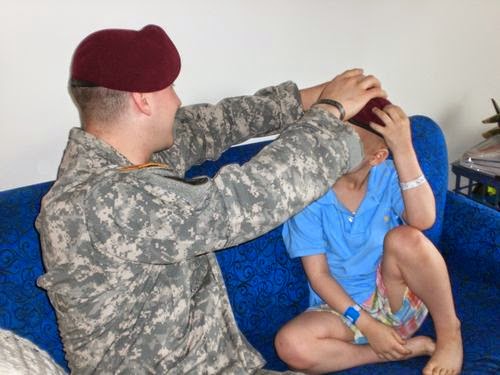 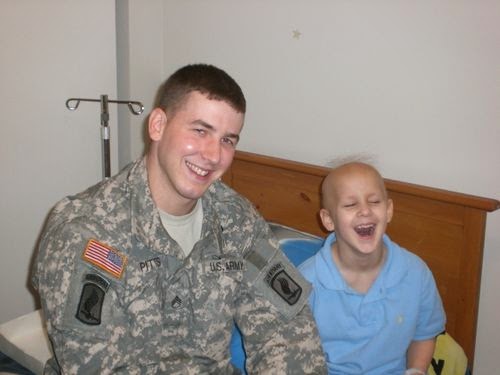 Ryan and Evan hanging out in Evan's room at the Target House near St. Jude Children's Research Hospital

The other "mission" was to visit Lakeland Elementary School in Lakeland, TN to thank the students for sending $6000 worth of winter socks to the Sky Soldiers during their fifteen month deployment in 2007-2008.  You can read the entire story at this link but here are a few photos from the event: 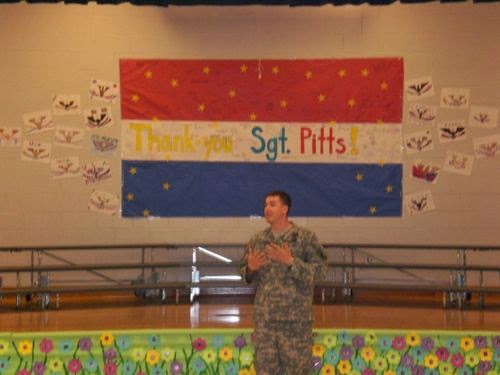 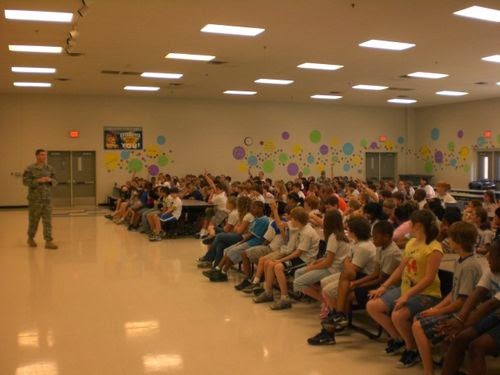 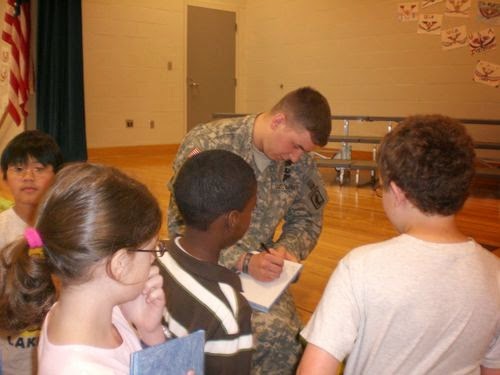 Ryan signing yearbooks for some of the fifth grade students

Ryan spent an hour or more signing their yearbooks.  It was such a joy to watch him with these young Americans.  The interaction seemed so easy and normal.

It is beyond an honor to know Ryan and his wife Amy.  Ryan will represent our nation, the Army and the ROCK (2-503d) with dignity and respect.


Posted by ParachuteCutie at 2:47 PM 1 comments