I was in the DC/Virginia area for a couple of weeks recently.  The more I visit there the more I wish I could live there for a few years because of all of the unique opportunities and events.

On Friday, March 15, 2013 I had the privilege of attending an Armed Forces Full Honor Wreath Ceremony at the Tomb of the Unknowns in Arlington National Cemetery.  Vice Chief of Defense Force of Australia, Air Marshall Mark Binskin (equivalent to a 3 Star General), laid the wreath.  Major General Michael S Linnington, Commander of the Joint Force Headquarters National Capitol Region, US Army Military District of Washington, escorted the Vice Chief.

Thanks to Major General Linnington, who I met just before the ceremony began, I had a fantastic place to stand and watch.  It was another cold and windy day in the DC/Virginia area but because it was spring break there was a huge crowd (mostly of high school students) present for the wreath laying.  I've been to several wreath laying ceremonies at Arlington.  They are all very moving but this one definitely had a lot of added pomp and circumstance. 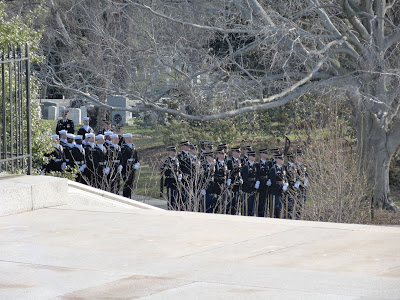 Members of the five branches of our Armed Forces waiting for the ceremony to begin
The units march up the steps towards the Tomb of the Unknowns in order of the date (oldest to newest) that their branch of service was organized - Army, Marines, Navy, Air Force then Coast Guard.  The precision is impeccable.﻿ 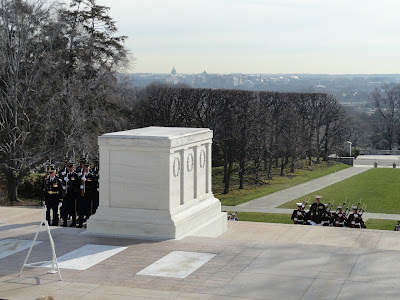 It is very moving to watch and listen as the Commanders of each group shout out orders to their men/women.  Finally they are all in place. 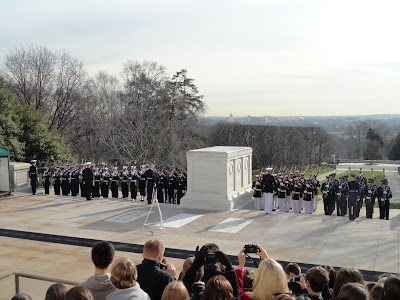 Then the Joint Armed Forces Color Guard moves into place 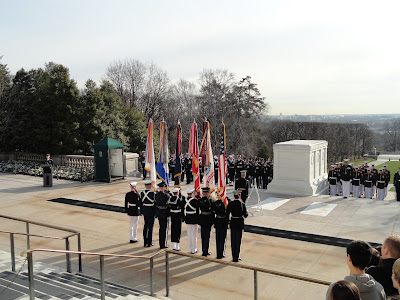 The Joint Armed Forces Color Guard is in place

After the Color Guard is in place the US Army Band, Pershing's Own, moves in. 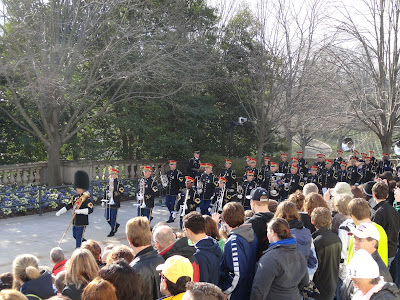 US Army Band - Pershing's Own

The Old Guard Presidential Salute Battery was there to fired their cannons to honor Vice Chief of Defense Force of Australia, Air Marshall Mark Binskin. The cannons begin to fire for his arrival to the cemetery, timing the rounds so that the first round was fired as he entered the cemetery and the last one went off as his vehicle stopped at the memorial amphitheater. An amazing feat of timing and precision because they fire a specified number of rounds. I cannot remember if it's 17 or 18 but I know it's somewhere around that number. They were thunderous for sure! 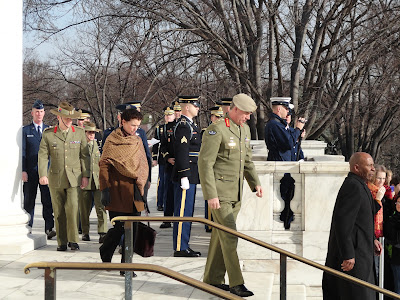 Members of the Official Party are escorted into place

Once the Official Party is in place the visiting dignitary who will place the wreath along with his/her host then move down the steps followed by a Color Guard with the flag from the visiting nation. 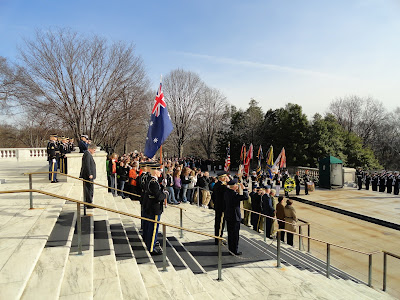 MG Michael Linnington accompanies Vice Chief of Defense Force of Australia, Air Marshall Mark Binskin followed by the Australian Color Guard
Air Marshall Binskin, assisted by one of the Tomb Guards, placed the wreath at the Tomb of the Unknowns 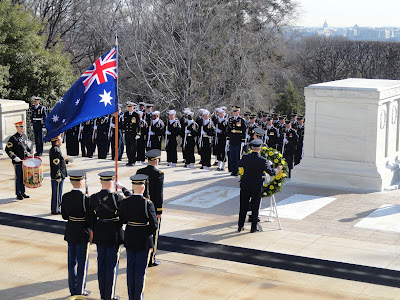 And then renders honors 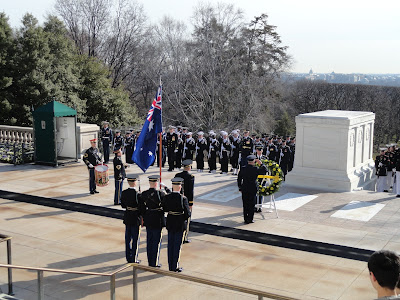 Vice Chief of Defense Force of Australia, Air Marshall Mark Binskin then moved back next to Major General Linnington and honors are rendered again. 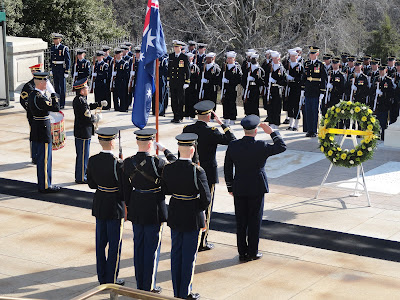 The bugler plays TAPS while all military personnel in uniform salute and all others are encouraged to place their hands over their hearts. 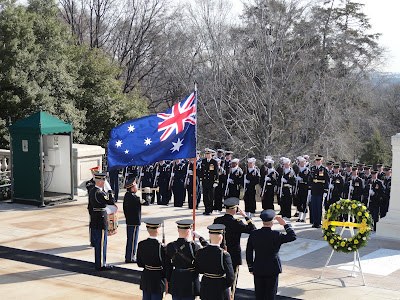 The visiting dignitary, Vice Chief of Defense Force of Australia, Air Marshall Mark Binskin, is escorted from the area by his host, Major General Linnington. 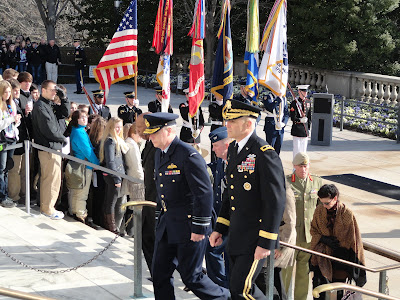 The Official Party leaves the area as the US Army Band leaves while playing and the members of the Armed Forces units march back down the steps.

I was incredibly proud to be an American that day.  Of course I am always proud to be an American.  But on that particular day, being able to see so many of our men and women in uniform, looking so sharp and and professional while representing us, was just extra special.  I honestly had no idea about the Armed Forces Full Honor Wreath Ceremony and am thankful to COL James Markert for inviting me to attend.
Posted by ParachuteCutie at 8:38 PM 1 comments 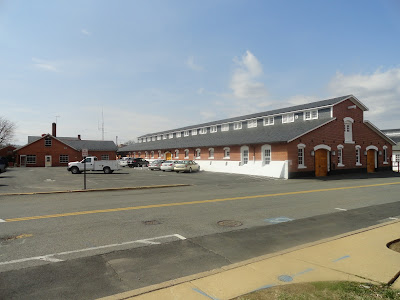 The Caisson Platoon is one of the Specialty Platoons of HHC Company of The 3d U. S. Infantry Regiment (The Old Guard) and is housed at Fort Myer in Virginia.  I recently visited friends at Fort Myer and was able to experience several events and opportunities for which I am so grateful.

Those of you who follow me on facebook know that for the past year I have been enamored with the horses of the Caisson Platoon.  I have posted many pictures on facebook of the horses - especially my favorite one, Sarge.  During my recent visit I stopped in the Caisson Stables several times.  The stables are open to the general public from 12:00 noon until 4:00 PM Tuesday through Sunday each week.  If you are in the DC/Virginia area or plan to be, you really should make time to visit the Caisson Stables.  The Soldiers of the Caisson Platoon are always willing to give you a tour and tell you about the history and legacy of the Platoon.  Plus you get to pet a lot of awesome horses.  If you have a group you need to schedule a tour well in advance.  You can do so by contacting  the Public Affairs Office.

The link to the Caisson Platoon's website hasn't been updated with the name of the new HHC Company Commander, CPT Walter Tompkins.  I first met CPT Tompkins and his wife when he was serving with the 173rd, 2-503d in Vicenza, Italy.  I was ecstatic to learn that he had taken Command of the Caisson Platoon.  It's such a small world.

I know, I know, where are the pictures?  You all like pictures.  Well, hang on they are coming.

I plan to write more posts about The Old Guard in the future but this one is a bit of a "fun" one in my estimation.  I asked if I could watch as the farriers of The Caisson Platoon where shoeing horses and my request was granted.  I'm fairly certain I squealed like a school girl when I found out I was approved to do this.  I hardly slept the night before my visit.  As a matter of fact I baked tons of goodies for the Soldiers as a small token of my appreciation to them.  No goodies allowed for the horses - darn it.

On a Wednesday at 10:00 am I walked into the Caisson stables and stopped at the desk.  A couple of the guys I had met on prior visits greeted me and welcomed me back.  I told them I had come to watch the farriers shoe a horse so they took me to the farrier shop.

When I walked in the shop the farriers were already working on Trooper.  I introduced myself and quickly learned that The Old Guard has 63 horses and two farriers.  I took a seat to stay out of the way and began watching and asking questions.  Because I have such a love for the horses and a huge interest in all the honorable things the Soldiers do, I'm always asking a million questions when I go to the stables. I was thankful at how open both of the farriers were to my questions and thrilled at how interested they were in teaching me about what they do.

SPC Charles Morrison and SPC Jordan Hoffman are the current farriers.  SPC Hoffman is the newest of the farriers.  Neither of these men had any experience in shoeing horses when they came to The Old Guard.  They have learned, and as they told me, continue to learn on the job.  That was pretty amazing to me especially as I watch both of them skillfully complete their work. 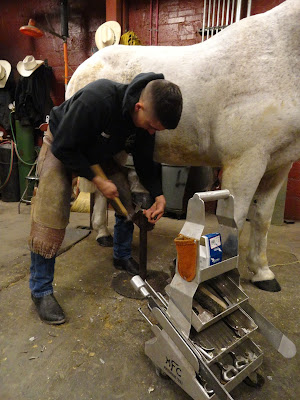 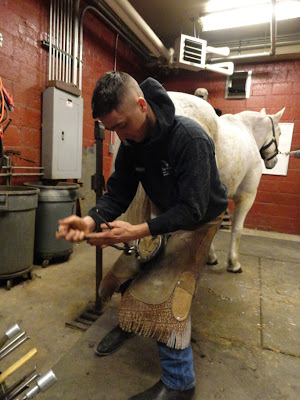 Still working on removing the shoe by taking out the nails.

Once the shoe is removed the farrier has to "clean" the bottom of the hoof taking great care not to irritate the sensitive areas of the hoof.  The picture below shows the hoof before it is "cleaned". 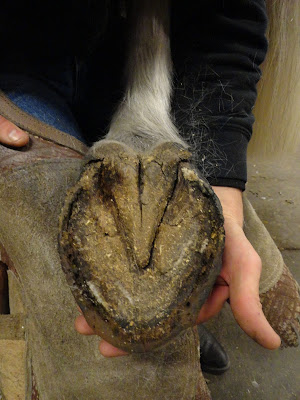 The hoof before it has been "cleaned" 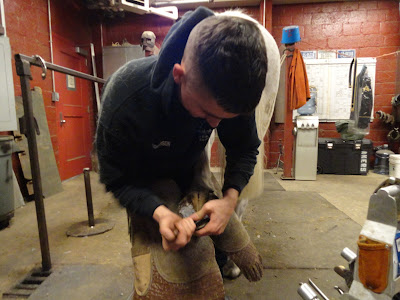 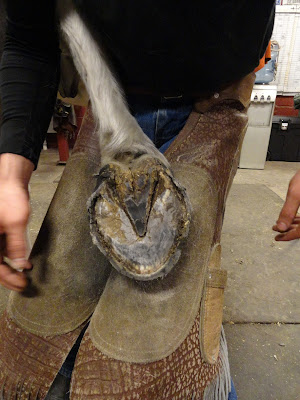 SPC Morrison showing me the hoof after he finished "cleaning" it.

After the bottom of the hoof is cleaned it is trimmed.  I didn't get any photos of them trimming the hooves.  I'm not sure why I didn't do that but I can assure you those clippers are huge!

There are two massive charts in the farrier shop.  One shows the last date each horse was shod.  The other shows who needs to be shod.  The farriers told me that some horses have "good" hooves and some have hooves that "aren't so good."  The horses with the "not so good" hooves have to be shod more often.  Generally speaking the horses are shod once every 4 to 6 weeks.  They told me that Trooper has really good hooves and very mannered when being shod.

SPC Hoffman and SPC Morrison shoe two or three horses a day.  It takes between one and a half hours and four hours to shoe a horse.  It takes much longer to shoe the larger horses such as Sarge and King.  It also takes longer to shoe horses who, unlike Trooper, don't have "good" hooves.

After Trooper had a few minutes to rest, SPC Hoffman, who had removed his front shoes prior to my arrival, began the process of replacing the front shoes by filing the hooves. 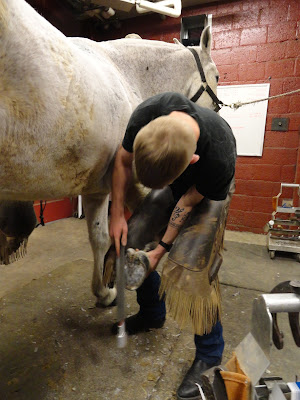 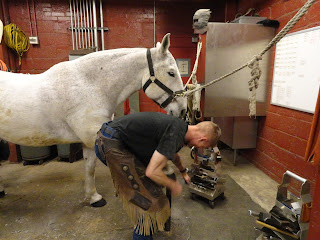 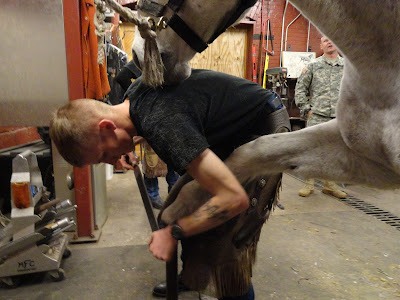 Finishing up the filing on one hoof

I was astonished at the amount of filings on the floor when SPC Hoffman finished filing one of Trooper's hooves.  There was a huge pile.

While SPC Hoffman was working on putting the shoes back on Trooper's front hooves, SPC Morrison was working to "repair" or "rebuild" the worn down parts of the rear shoes he had removed.  Each set of shoes is used two or three times before it is discarded.  I found that very interesting.  As much as I absolutely loved watching them shoe Trooper I wished I had been there on a day when they were starting out with a new set of shoes so that I could see the difference in the process. 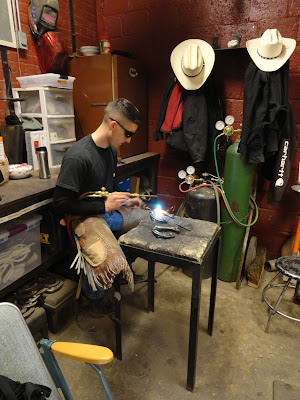 After SPC Hoffman finished filing Trooper's hoof he began to "fit" the shoe so that he could nail it back on. 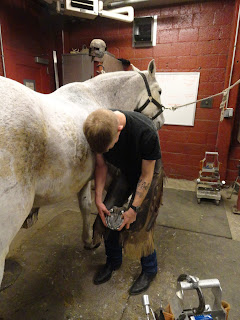 Once SPC Hoffman had made adjustments he began to secure the shoe back on Trooper. 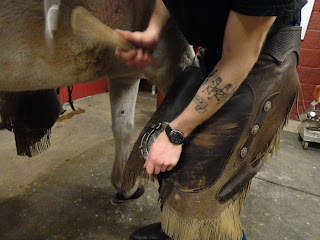 SPC Hoffman nailing the shoe back on 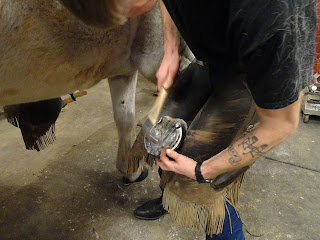 Still working on that shoe 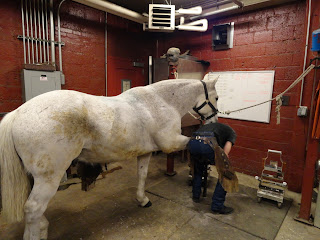 Trooper standing patiently as SPC Hoffman finished up the shoe 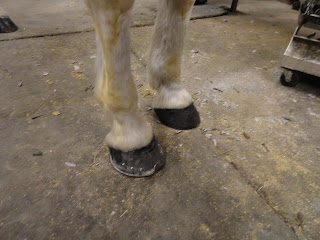 The men told me that, generally speaking, a shoe will last 18-24 weeks and can be used for about three times.

I am extremely grateful to all who were involved in allowing me to watch this process.  I am equally as grateful to SPC Morrison and SPC Hoffman for their genuine interest in teaching me about what they do.  They could not have been more welcoming and professional.

A couple of days later I stopped back by the Caisson stable.  One of the Soldiers took me out to one of the areas where the horses get exercise at Fort Myer.  Trooper, sporting his new shoes, was out enjoying the day. 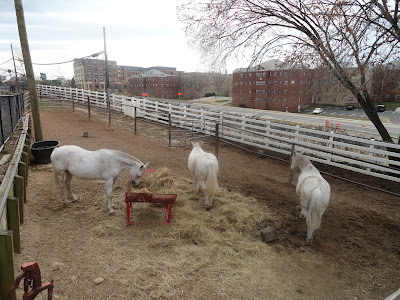 Trooper (in the middle)
Posted by ParachuteCutie at 10:54 AM 2 comments