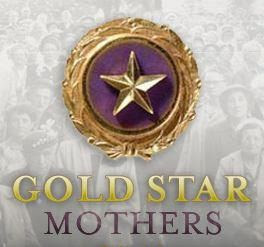 Mothers of fallen service members began calling themselves “Gold Star Mothers” during the First World War, but the sorrowful bond they share reaches back to every woman who has lost a son or daughter in uniform since our nation’s revolution. The Army cherishes the mothers of its Soldiers as bedrocks of support and comfort, and honors the mothers of its fallen as resilient legacies of their children’s service. The United States began observing Gold Star Mothers Day on the last Sunday of September in 1936. This year, the Army joins the nation on September 25th in recognizing the sacrifice and strength of its Gold Star Mothers.

Please take a few moments to remember our fallen through all wars and their mothers whose sons gave their all on behalf of our great nation. 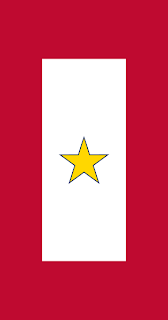 The last Sunday in September of each year is designated Gold Star Mother's Day.

Each year the United States president is requested to issue a proclamation to: call on US government officials to display the nation’s flag on all government buildings; and to call on people to display the flag and hold appropriate meetings at homes, churches, or other suitable places on Gold Star Mother’s Day to publicly express the love, sorrow, and reverence those who are Gold Star mothers and their families.

American Gold Star Mothers, Inc. was incorporated in 1929, obtaining a federal charter from the US Congress. It began with 25 mothers living in the Washington DC area and soon expanded to include affiliated groups throughout the nation. On June 23, 1936, a joint congressional resolution designated the last Sunday in September as Gold Star Mother's Day, a holiday that has been observed each year by a presidential proclamation.

I will take some time today to think of some very special Gold Star Mothers and of their sons and husbands who are true heroes.  I hope you will do the same.
Posted by ParachuteCutie at 12:01 AM 0 comments 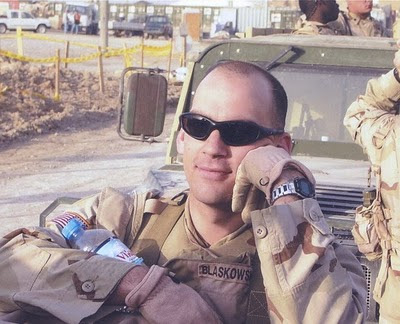 Four years.  Four very long years.  It really doesn't seem like it has been that long.

SFC Matthew Blaskowski was killed at Firebase Vegas in Kunar Province, Afghanistan by a lone sniper's bullet on 23 September 2007.  Matt's death has left a huge hole in so many hearts.  His widow, Daniela; his parents, Terry & Cheryl; his brother Stan and his wife Becky and their two children, Keegan and Haley, as well as legions of friends and Army buddies from around the globe.

As part of the Memorial Day remembrance events this year (2011) the town of Cheboygan, Michigan dedicated a Memorial Monument to all of the fallen in the Wars on Terror from their city.  I was honored to be at the dedication with the Blaskowski family, some of Matt's former battle buddies, many family friends and a host of citizens. 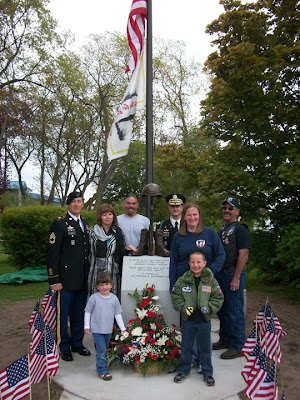 Matt's parents, brother, sister in law and their children and battle buddies at the Memorial 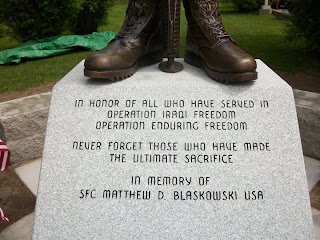 The base of the Memorial.  To date Matt's name is the only one inscribed.  One too many but, hopefully, the last one to be added.
Rest in Peace Matt.  You are missed as much today as you ever have been but we also continue to remember your smile, your wit, your laugh, your love of hunting, your compassion for mankind and your zest for life.  A true American Hero taken from us way too soon but whose memory will live forever.

Matt was laid to rest near his boyhood home in Levering, Michigan on 4 October 2007. 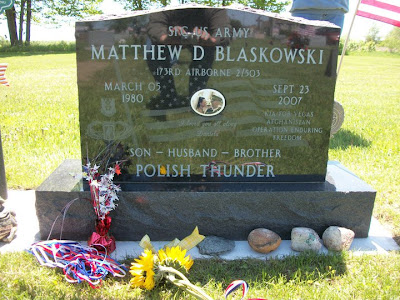 I rarely drink alone but tonight I raise a glass to Matt.  CHEERS!

I wrote this in tribute to Matt last year.

Matt Burden of Blackfive wrote about SFC Blaskowski here, here and here in his "Someone You Should Know" series.
Posted by ParachuteCutie at 10:17 PM 2 comments