SFC Chad Stackpole, Sergeant of the Guard at the Tomb of the Unknowns, makes his last walk and inspection 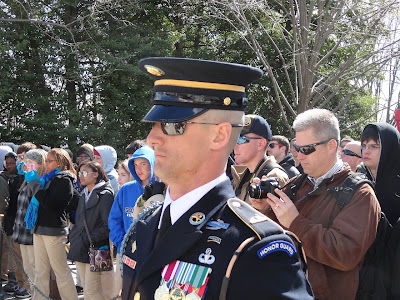 SFC Chad Stackpole
On Thursday, March 14, 2013, SFC Chad Stackpole made his last walk and inspection at the Tomb of the Unknowns in Arlington National Cemetery.  I was privileged to be there to witness this event.  I'm told that this event takes place about twelve times a year.
Many of you in the military community may recognize SFC Stackpole's name as the 2009 winner of Best Ranger Competition along with his teammate SFC Simms.  But March 14th wasn't about Best Ranger Competition, it was about honor and duty at the Tomb of the Unknowns.
On that cold and windy day SFC Stackpole emerged from the barracks under the Tomb to begin his final inspection of the Sentinel who would take over guarding the Tomb. 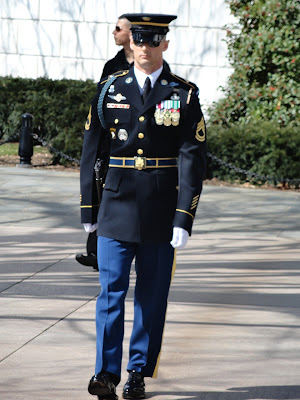 SFC Stackpole after just leaving the barracks under the Tomb
There was a large crowd on hand as SFC Stackpole completed the inspection of the Relief Guard who was about to begin his time guarding the Tomb. 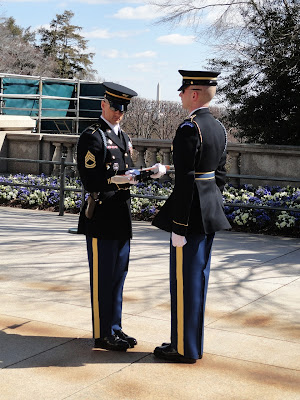 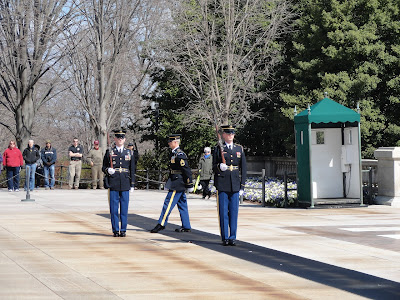 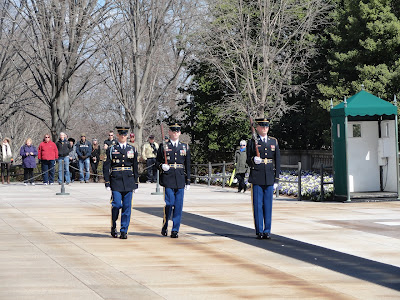 SFC Stackpole on left
﻿
Once the Changing of the Guard was complete, SFC Stackpole, who would normally have marched smartly back to the barracks under the Tomb, stopped and came to attention right in front of me in preparation for his Rose Ceremony.  The Rose Ceremony is conducted by each Tomb Guard at the end of their final walk or inspection at the Tomb of the Unknowns. 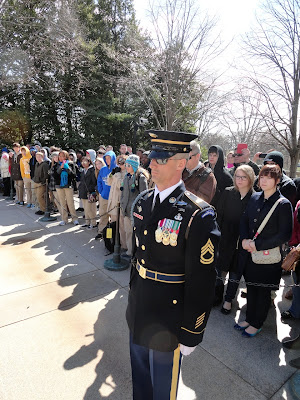 SFC Stackpole preparing for his Rose Ceremony
As the Rose Ceremony began, SFC Stackpole marched to the center of the area and turned left to his wife.  He gave her a rose then removed his white gloves and handed them to her. 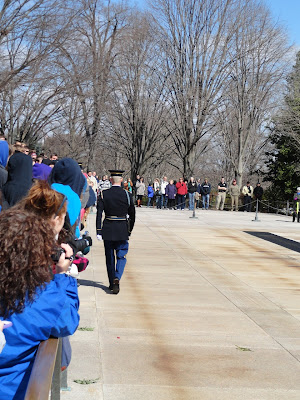 Marching to the center to get the roses 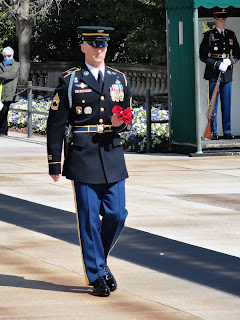 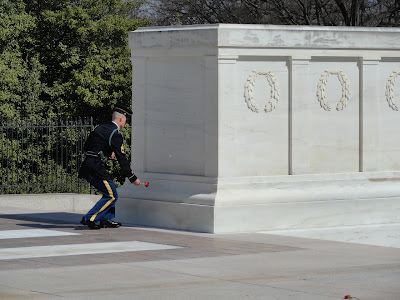 SFC Stackpole places a rose at the WWI Tomb of the Unknowns
﻿
SFC Stackpole then marched to the WWII crypt where he paused to salute then kneel to place a rose.  He stood up and, again, saluted.


SFC Stackpole places a rose at the WWII crypt
﻿
He repeated this honorable and moving process of placing a rose and saluting at both the Korean War crypt and the Vietnam War crypt.


SFC Stackpole placing a rose at the Korean War crypt 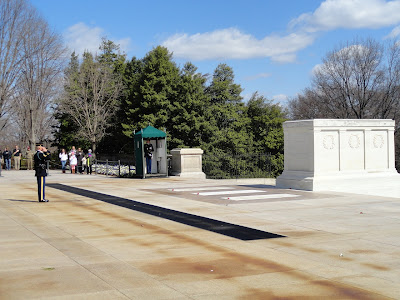 Rendering Final Honors after the last rose has been placed

I found it incredibly poignant that, just after SFC Stackpole rendered his final honors, a gust of wind blew the roses from where he had just placed them.  To me it symbolized a "thank you" to SFC Stackpole and a wish for his future endeavors to go well. 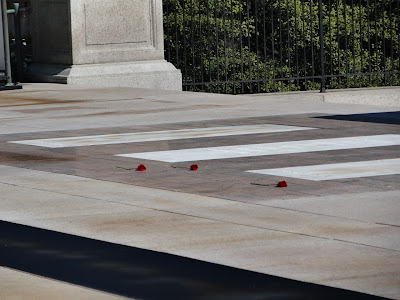 The wind blew the roses just placed by SFC Stackpole

SFC Stackpole marched to his family and escorted them from the Tomb of the Unknowns back to the barracks. 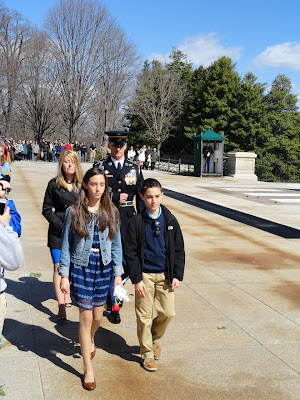 Once inside the barracks SFC Stackpole's Commander, COL James Markert, thanked SFC Stackpole, his wife and children, for their service.  He wished them well as they move on to their next duty assignment with the 82nd Airborne. 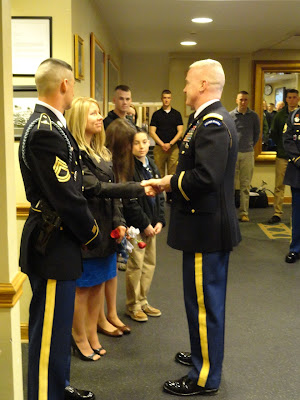 COL James Markert thanking Mrs. Stackpole for her committment and her support of SFC Stackpole 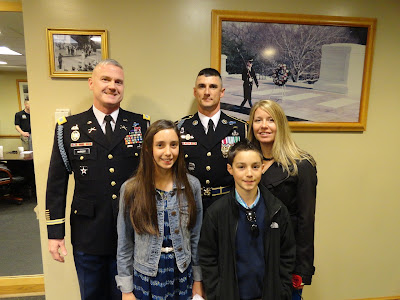 There were speeches lauding SFC Stackpole for his time at The Old Guard as well as his career in the Army. 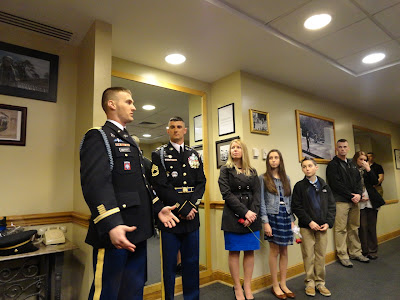 I am so grateful to have been allowed the privilege of witnessing this historic day for both the Stackpole family and the Old Guard.
Posted by ParachuteCutie at 7:47 AM

That is such an honor, second only to receiving the MOH. He will carry that honor for the rest of his life. Thanks for posting and sharing this.

I knew Chad when he bagged groceries as a young man. He has turned out quite well.