A private residence in Amherst, NH and the Manchester Country Club located in Bedford, NH were the venues for an amazing weekend of camaraderie, golf and fund raising on August 2nd and 3rd, 2015.  The purpose of the events was to raise money for the 173rd Airborne Brigade Association Foundation.  The Association Foundation provides support for the Gold Star Families and the wounded from the Brigade as well as providing scholarships for the family members of the Brigade. 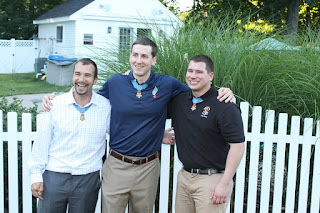 Sal, Ryan and Kyle at the cocktail reception

We could not have asked for or ordered better weather for either day's events.  On Sunday Dana and Jo-Ellen Redmond opened their home where a cocktail reception was held for anyone who wished to participate but mostly for those who are not golfers to be able to spend some time with the guest hosts.  I never tire of seeing our Veterans together reminiscing and reconnecting.  NEVER!!! Everyone enjoyed a lot of laughs and great conversation while enjoying beer, wine and incredible h'ordeuvres from a local caterer.  It is impossible to thank the Redmond's enough for their hospitality and assistance with the weekend's events. 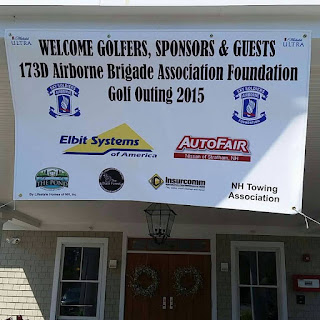 The golf outing was held on Monday August 3, 2015 at the Manchester Country Club in Bedford, NH.  We were blessed with beautiful weather, albeit a bit windy, and a spectacular golf course.  The golfers began arriving around 10:45 am.  After stopping at the registration tables to sign in and collect their goodie bags filled with golf tees, golf balls with the 173rd Airborne Brigade Association Foundation logo on them, golf related gift certificates, snacks and water (among other things), the golfers made their way to the patio for a delicious lunch.  They also had the opportunity to check out the raffle, silent and live auction items.  Bids were placed on the silent auction items and raffle tickets were sold "by the arm".

At noon an auction was held to auction Sal, Ryan and Kyle to the teams who bid the most for each of them. 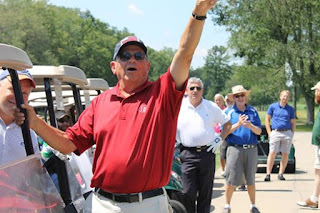 One of the winning bidders 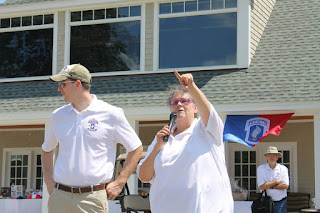 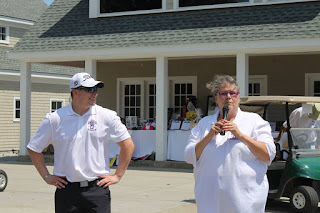 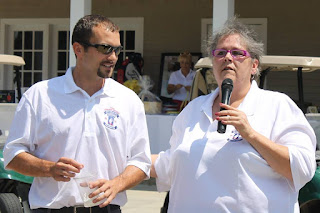 At 12:45 Eric Hitchcock, President of the 173rd Airborne Brigade Association Foundation welcomed everyone to the event and thanked them for their support.  He also talked briefly about the core missions of the Association Foundation.  Finally, Eric asked everyone to take a minute as they approached each tee to read the hole sponsorships signs.  The majority of the signs were in memory of those who have given the ultimate sacrifice on behalf of our nation.  Eric then turned the microphone over to the head golf pro Todd McKittrick who made a few announcements and they were off on the shotgun start for the day's scramble. 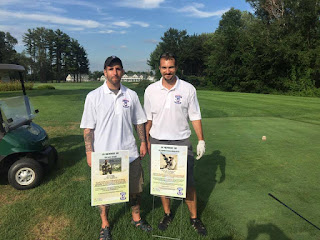 ROCK Paratroopers Jay Levy and Sal Giunta behind 2 of the many hole sponsorships signs on the course honoring and remembering Veterans and Veteran/spouse support groups.
(Club house in the background) 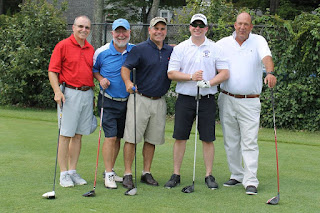 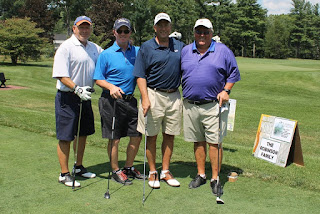 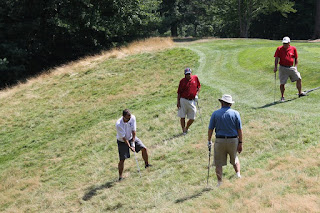 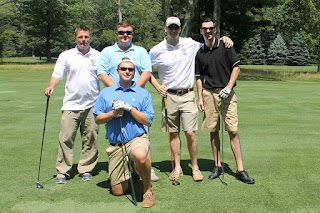 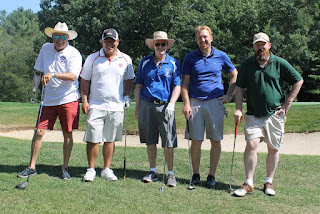 One of the teams with a "guest" for the photo.
Eric Hitchcock (President of the 173rd Airborne Brigade Association Foundation who snuck in the photo), Jedda Deloria, Bob Lucas, Tanner Royce and Mark Seavey 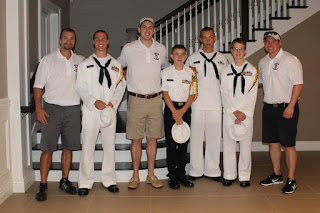 Sal, Ryan and Kyle with members of the Sea Cadets who presented the Colors 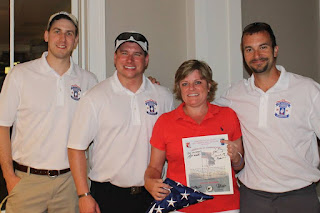 Ryan, Kyle, Jennifer Bartley and Sal
Jennifer bought one of the live auction items.
She is also a Veteran who flew Blackhawk helicopters
AWESOME lady 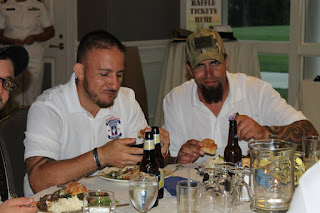 This event would not have been possible without the assistance and support of the volunteers.  A VERY SPECIAL thanks to Eric Hitchcock, Jerry Cooper (Treasurer of the Association Foundation), Cheryl Blaskowski (Gold Star Chairperson for the 173rd Association Foundation), many members of the 173rd Airborne Brigade Association New England Chapter who traveled from all over the area to be there to volunteer as needed (they did a STELLAR JOB), Sherri Kirk and Jo Lombardi (civilians who supported the 173rd on prior deployments and Dana and Jo-Ellen Redmond.

We are so grateful to our sponsors for this event.  Elbit Systems of America was our main sponsor.  Along with their generous event sponsorship donation they had several teams who registered to play in the event.  Our other sponsors were AutoFair Nissan, Lifestyle Homes of New Hampshire, The Black Forest Cafe and Bakery, Insurcomm Construction, New Hampshire Towing Association, John Rich and his Redneck Riviera boots, Bob Lucas, The Robinson Family and Bud & Susan Sourjohn and a myriad of folks who sponsored tee marker signs honoring and remembering Veterans and military support groups.  The support of all of our sponsors and participants ensured that this event was so successful.

Some photos from the cocktail party: 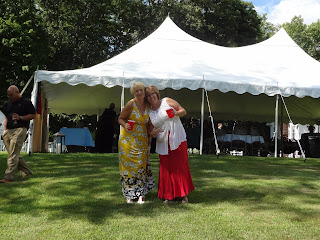 Jo Lombardi and Cheryl Blaskowski in front of the tent 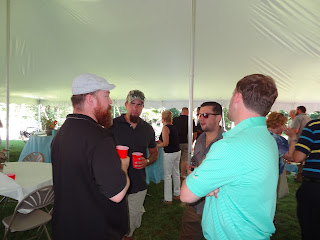 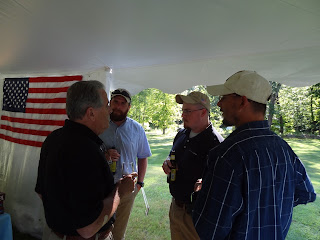 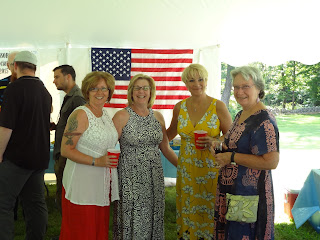 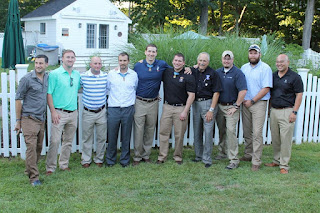 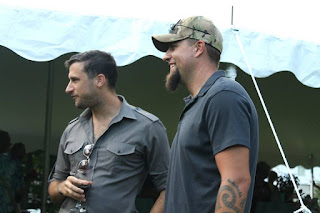 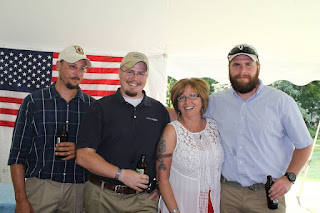 We have had such amazing positive feedback from our events in New Hampshire.  "Save the dates" for next year.  The cocktail reception will be held on Sunday July 24th and the golf outing will be held on Monday July 25th.  The Manchester Country Club will be our venue again next year.  We owe a huge "thank you" to the staff of the Country Club.  I don't think I've ever worked with a more professional and easy to work with group in my life.  They helped ensure the event was flawless.

We haven't finished our final accounting as of this writing but I can tell you that we doubled our expectations for the amount of funds raised.

Finally - we are hoping to announce events of the same kind to be held in Colorado sometime in 2016 but have not gotten final commitment on that yet.  We'll keep you posted.

Posted by ParachuteCutie at 2:33 PM

Thank you so much for the detailed article
clipping path